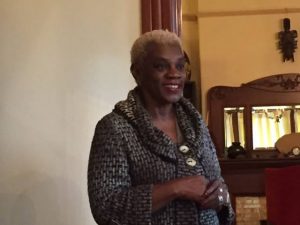 What was the profile piece that Maureen Dixon wrote about you?
Maureen wrote a profile piece that looked at the contrast between my cultural upbringing and the culture of the Gullah people, which I adopted. The interview gave me an opportunity to speak of my experience that even though I was the same color as the Gullah people, our cultures were very different. I was able to talk about what I had to do and to learn to assimilate and to appreciate these important cultural differences.

Did Maureen represent you fairly?
She did more than that. She helped me clarify my meaning for an audience of readers who would not be familiar with the Gullah people. When I met Maureen there was something about her that made me feel at ease. And even though her background and color are different from mine, she made me feel free enough that I knew I could tell her the truth.

What have you learned through working with Maureen?
I was inspired by her. We didn’t know each other beforehand. We just sat down and started talking. And even though as a storyteller I talk for a living, I’ve never talked with anyone else so easily and intimately about my life. It also inspired me to start writing. It made me see that even though I’m just a regular person, that if Maureen wrote about me then I could write some things too. I have finished nine children’s books since then, and that all manifested after my interview with Maureen.

Why would other people enjoy working with Maureen?
Maureen has a gift in helping people feel confident in telling the truth and even bringing forth something that has always been there but you didn’t know how to bring forth on your own.

“When you spend 30 minutes with Maureen, you’ll realize she’s the one you want to have write your book.”
– Hemal Sharifzada — Author currently working with Maureen

“Maureen gets to the heart of an organization and puts it into words. What she wrote for us has so much heart! It is exactly what I wanted. I will definitely work with Maureen again.””
– Micheal Pope, Executive Director, Alzheimer’s Services of the East Bay

“Maureen is an empathetic collaborator and conduit for other people’s stories and perspectives, with an innate ability to capture and reflect the voices of those with whom she works. Knowing that communicating one’s thoughts clearly in writing is a fundamental skill that leads to success in higher education and the workplace, she dedicates her considerable talents as a writer, coach, and dynamic member of our Board, to benefit under-resourced middle and high school students throughout the East Bay.” – Anita Templer, Executive Director, WriterCoach Connection